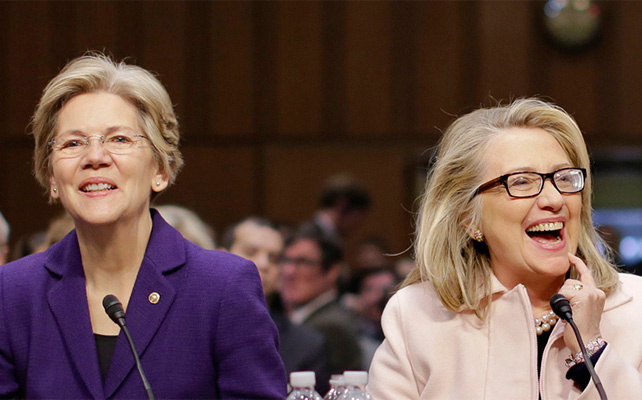 This article was originally published on July 24, 2016 in the Huffington Post and the Sonoma Independent.

Clinton’s decision is a carefully calculated risk for the Democratic nominee: that the 12 million primary voters who defied the establishment to enthusiastically vote for Bernie Sanders will have no choice but to vote for Hillary in November. As reported here, Clinton believes that her focus needs to be on convincing white men, who overwhelmingly support Trump, that she is a better choice than Trump because she has a centrist white man on her ticket.

In a poll of Clinton supporting voters last month, Senator Elizabeth Warren was found to be the people’s choice for Clinton’s VP selection. Warren was favored by twice as many voters as the second choice, Cory Booker, and received seven times as much support as Governor Tom Kaine.

In response to concerns that the Democrats would risk losing a Senate majority if Hillary should choose Warren as her VP because Warren’s Senate seat would then be  filled by a Republican Governor, Harry Reid did his legal homework. He reported to the public that the Governor’s selection of a Republican Senate replacement would only last a few months. The seat would be quickly be voted upon in a special election that Massachusetts State law requires.

Democrats could have Warren as VP and still win control of the Senate, Reid assured the public.

A Warren selection would have energized Bernie Sanders supporters like myself to turn out, donate, and volunteer for a Clinton-Warren ticket, based on a sense that although we did not win the nomination, one of our leaders is at least on deck for a people-powered Democratic Party future.

As HuffPost blogger Miles Mogulescu wrote last month, “The Democratic Party has two, almost equal wings: A centrist Clinton wing and a progressive Warren-Sanders wing. Picking Warren would help unite them into one mighty bird that could soar to victory. Or Hillary could choose a fellow centrist like Kaine and the campaign could flop along on one wing.”

The Democratic Party has a long history of taking its progressive wing for granted, yet there is no precedent for a Democratic primary in which a truly leftist Democrat received so many votes.

Instead of providing a seat at the table of power for a faction representing nearly half of all Democratic voters and nearly three quarters of those under 30, Hillary Clinton has instead decided to veer to the right and assume that we will be sufficiently frightened of a Trump Presidency to all vote for her anyway.

Clinton’s “I Don’t Need Warren” calculation makes a misguided assumption about We, the grassroots people, who turned out by the tens of thousands at rallies across the country for  Bernie’s “Second American Revolution.”

Who turned out for a progressive economic agenda.

Who turned out for a peaceful future.

Who turned out for a government for We, the People.

Instead of They, the Corporations.

Democratic Presidential Nominee Hillary Clinton is making a misguided assumption that nearly all Bernie boosters will choose her over Donald Trump in November.

The 45% of the Democratic Primary electorate who backed Bernie Sanders are the last voters in the world who should be taken for granted.

While we are moved and inspired by Sanders, we are by definition independent-minded. Bernie does not control our vote.

Sanders’ endorsement for Hillary Clinton, which will grow stronger as Trump plunges dangerously deeper into a racist, fearful, anti-government psyche, does not mean that Bernie’s voters will fall in line behind Clinton.

Clinton’s ill-advised choice for VP flies in the face of the challenging fact that  62% of American voters believe that Hillary is not honest and trustworthy—about the same number as believe this about Donald Trump. And when it comes to saying what he believes, Trump polls much better than Clinton.

It is shocking that so many American voters somehow believe that a lying, tax-dodging billionaire con man will do a better job looking out for their interests than an experienced establishment Democrat like Hillary Clinton.

Yet this is the grim reality that our nation faces today,

During the past six months, a majority of American citizens rejected either the Republican or Democratic Party establishment’s choice.

This is an entirely unpredictable election.

According to the New York Times,  the most recent high quality poll now forecasts a dead heat between Trump and Clinton when libertarian Gary Johnson is on the ballot.

Libertarian Gary Johnson is indeed on the ballot in November’s General Election.

Sanders might not have wanted the VP job, but Warren was eager for it. She is a tireless, articulate, inspiring campaigner for justice for the average American, and would have added millions of young people to the November turnout.

When it comes to national leaders who have earned a reputation for being outspoken and trustworthy, nobody comes close to Elizabeth Warren and Bernie Sanders. That’s why Wall Street railed against Warren’s VP candidacy, even threatening to withhold donations if Clinton selected her as her running mate.

With Clinton’s VP choice of Kaine, it has become challenging for Bernie supporters to be convinced that Hillary Clinton values our support as much as she values the support of Wall Street, Big Pharma, the military-industrial complex, and Monsanto.

I will grudgingly join the majority of Bernie boosters who will vote for Hillary as the far lesser of two evils in November.  But there are others who have come to a different conclusion, especially under-30 voters. Bernie can influence them, but he does not control their votes any more than I do.   Many may not bother to vote in November at all. Others may ignore the perils of a Trump Presidency and vote for Green Party nominee Jill Stein, or libertarian Gary Johnson. Or even the consummate showman Donald Trump.

If a significant percentage of Bernie-backing voters reject a Clinton-Kaine ticket by not showing up to vote, or by voting for other candidates, then Hillary would lose in November.

Donald Trump would become the next President of the United States of America.

That would be a tragedy of historic proportions.

A tragedy, in part, of Hillary Clinton’s making.

Note: this article was published on July 24, 2016 on the Huffington Post and the Sonoma Independent.  It was awarded first place for political commentary in the 2017 Greater Bay Journalism competition.