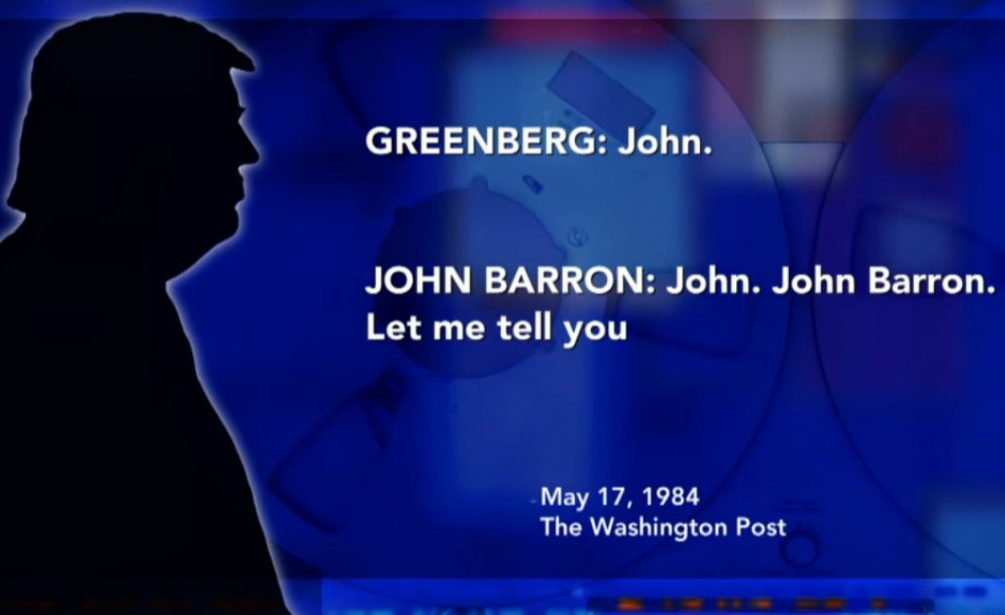 This segment originally aired on Late Night with Stephen Colbert on May 10, 2019.

Stephen Colbert discusses Jonathan’s 1984 Forbes interview with Donald Trump. In the taped interview, Trump impersonates a made up person named “Jon Barron,” who can supposedly verify the Trump Family’s finances. Through this deception Trump managed to lie his way on to the first Forbes 400 list.

Trump Spent Years Posing As His Own Spokesman

Stephen Colbert: But all the years that Trump was losing money, which seems to be all the years, he was still selling himself as a successful billionaire and the media was happy to pitch in. For instance, in 1984 Trump wanted a better ranking on the Forbes 400, so the magazine got a call from a mysterious member of the Trump organization, trying to convince them that Trump’s Father, Fred had transferred all his wealth to Donald.

Donald Trump: John Barron. Let me tell you what the deal is just so you understand. Mr. Trump, first of all, most of the assets have been consolidated to Mr. Trump, you know, because you have down Fred Trump. But I think you can really use Donald Trump now and you can just consolidate it.

Jonathan: Are you saying that for tax purposes, it’s been, the ownership has been transferred to Donald?

Jonathan: Ok, and when you say, you know, in excess of 90 percent of the ownership?

Donald Trump: I’d say in excess of 90. In face, well, it’s really even closer to even the, the ultimate.

Donald Trump: Oh yea, sure, he’s the chairman. Donald’s the president and Fred Trump is active. He’s an excellent guy, and you know how, they’re very close, as you’ve heard or know, or perhaps you don’t know.

Stephen Colbert: “Closer to even the ultimate.” I only know one other person who mangles the English language like that.

Stephen Colbert: God is the ultimate? He sounds like a youth pastor who longboards. In Trump Voice.  God is the ultimate. The ultimate judge. The ultimate warrior. And you should see god play ultimate frisbee. So yes, that was Trump on the phone posing as his own hype man. He even once admitted that he was John Barron, testifying under oath in 1990 that: “I believe, on occasion, I used that name.