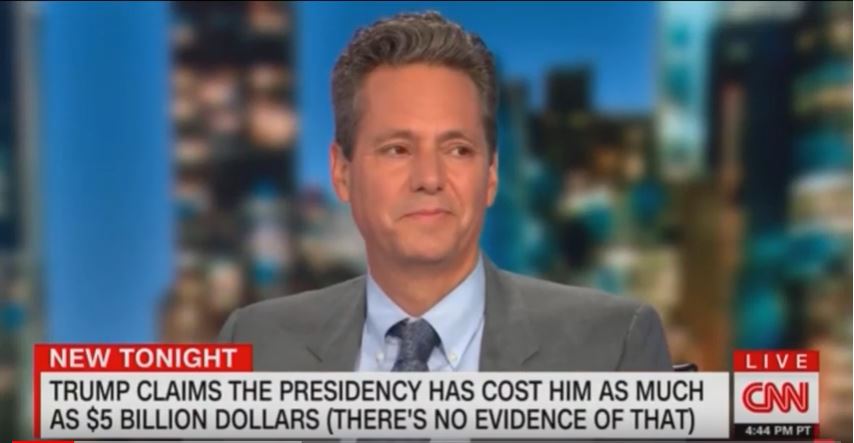 This segment first aired on CNN’s Out Front with Erin Burnett on August 13, 2019.

TRUMP: This thing is costing me a fortune, being president.

It’s probably going to cost me, including upside, downside, lawyers because every day, they sue me for something. It’s probably costing me from $3 billion to $5 billion for the privilege of being — and I couldn’t care less. I don’t care. You know, if you’re wealth, it doesn’t matter. I just want to do a great job.

BURNETT: OUTFRONT now, Jonathan Greenberg, former journalist at Forbes. He is the guy who helped build the Forbes 400 richest list.

So, let’s start here. The president says it’s probably costing me from $3 billion to $5 billion.

JONATHAN GREENBERG, FORMER FORBES REPORTER: No, it doesn’t add up. I mean, Donald Trump has never been worth $3 billion to $5 billion.

BURNETT: OK. So, the bottom line is he doesn’t have that much to begin with.

GREENBERG: He’s — no, he is losing money and he is making money. He is losing money partly because people — he is a very bad businessman. He brought the Doral Hotel, for example, and golf club. It’s bigger than his next 10 clubs put together.

It loses money because he is a terrible manager and also people don’t want to stay at his golf clubs. Some of — he is losing money on luxury apartment buildings because the money launderers, the Russians and drug money cartel don’t want to invest with him because he is high profile. He is making money in Mar-a-Lago, where doubled the entrance fees.

GREENBERG: Trump International in Washington because —

BURNETT: So, he is losing and even people — you know, his name gets removed from builds. People don’t want to say at the clubs because he is controversial. They don’t want to deal with that with their friends. So, there is some negative but the positive you’re saying overall way outweighs it?

BURNETT: OK. So, the chairman of the House Judiciary Committee, Jerry Nadler, told me he has started formal impeachment proceedings, OK? Jonathan, that he is investigating Trump’s money and he is saying separate from Russia looking at claims about money.

GREENBERG: The chances are very high. I mean, that’s why Trump built a brick wall around his taxes around who he owes money to and around his debt.

His net worth I doubt it’s even a billion dollars. Nobody knows how much he owes or to whom or what type of deals he struck in order to get that money. We know he was a failure as a businessman, he went bankrupt in 1990 and ’91. He took a company public that went bankrupt, stiffed all his junk bond holders. And then —

GREENBERG: No one is going to lend him money in 2004, 2006, 2008, unless they have money coming in that they want to launder. And that’s what you see in Panama City. That’s what you see at the Trump SoHo International Hotel on Spring Street.

His biggest properties done in the past 20 years since his last bankruptcies, they are going to unravel some interesting things. And that’s why he is fighting those subpoenas tooth and nail. BURNETT: All right. Thank you very much, Jonathan. I appreciate

your time. As I said, the one who compiled that original Forbes list, and certainly knows the numbers on it. Thanks.