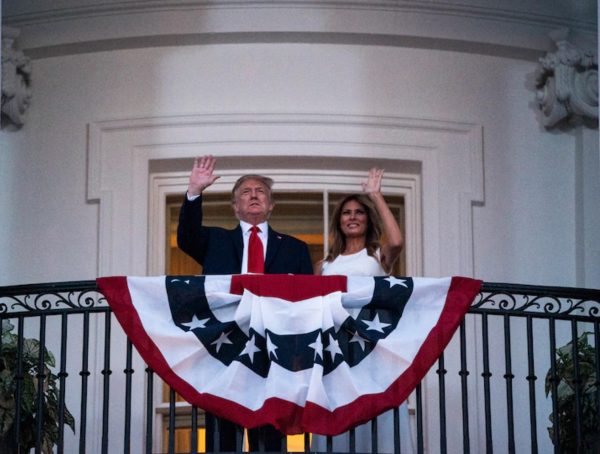 He lies about voter fraud, admires authoritarians, tries to suppress free speech and uses the law against those who would hold him accountable.

People have debated whether Donald Trump is fascist since he announced he was running for president. In 2015, Jamelle Bouie wrote in Slate that Trump, in his campaign speeches and Twitter utterances, exhibited seven of the 14 characteristics identified by the Italian novelist Umberto Eco in his defining essay “Ur-Fascism.” In 2016, the Georgetown professor John McNeill assessed Trump’s fascist tendencies on a scale of zero to four “Benitos,” after the father of fascism, Benito Mussolini. As an amateur, Trump fell short.

That was then. What about now? And, more important, what about the Trump of a potential second term in the White House?

On June 1, as demonstrators gathered and marched in Washington and around the country to protest the killing of George Floyd by the Minneapolis police, President Trump, in a brief speech in the White House Rose Garden, called for states to use the National Guard to “dominate the streets” and promised that if they didn’t, “I will deploy the United States military and quickly solve the problem for them.” Federal forces then used tear gas and stun grenades on peaceful protesters to clear a path for him to walk from the White House to nearby St. John’s Episcopal Church for a photo op with a Bible as prop.

“The fascist speech Donald Trump just delivered verged on a declaration of war against American citizens,” Sen. Ron Wyden (D-Ore.) tweeted. Rep. Jared Huffman (D-Calif.) — noting in an opinion column three days later that the president’s “attempt to use chaos to shred democratic safeguards and consolidate authoritarian power is deadly serious” — put it this way: “This is our own Reichstag fire and, yes, Trump is playing the role of would-be Fuehrer, proclaiming a ‘God-given signal’ to seize more power.”

I first reported on Trump in 1982, when he conned me into putting him on the Forbes 400 rich list. That Trump was just a younger version of this Trump, and now I worry that what happened in June was a mere prelude; he’s certainly capable of a far worse Reichstag-fire-like event that would allow him to steal the 2020 election. And if he does win a second term, legitimately or not, his words and actions of the past four years provide 12 indicators that he would seek to replace our democracy with a fascist dictatorship.

1. Trump uses military power and federal law enforcement to suppress peaceful political protest. In June, he deployed the National Guard and federal officers to violently evict protesters in Washington, terrorizing them with two military helicopters flying low near the crowd. Trump also had 1,600 members of the 82nd Airborne on standby outside the capital and readied tens of thousands of rounds of ammunition. It’s reported that he wanted to deploy 10,000 troops to Washington alone. Gen. Mark Milley, chairman of the Joint Chiefs of Staff, took this so seriously that he got into a shouting match with the president over the prospect of deploying active-duty troops on U.S. soil.

2. Trump persistently lies about voter fraud, setting the stage for him to use emergency powers to seize control of the election or challenge the results if he loses. During a recent special election in California, for example, after a Republican mayor requested the opening of an additional polling station, Trump tweeted falsely that the Democrats “have just opened a voting booth in the most Democrat area in the State. They are trying to steal another election. It’s all rigged out there. These votes must not count. SCAM!” Trump has repeatedly tweeted that mail-in voting will lead to fraudulent and rigged elections. After winning the 2016 presidential election while losing the popular vote, he claimed a landslide victory and said that Hillary Clinton’s lead in the popular vote was due to “millions of people who voted illegally.”

3. Trump has repeatedly suggested that he might remain in office after a second term and has offered reason to doubt he’d leave peacefully after this first term. “Under the normal rules, I’ll be out in 2024, so we may have to go for an extra term,” he said at a rally last September. A year earlier, he remarked, “President for life . . . maybe we’ll have to give that a shot someday.” It’s a joke he’s tossed off on several occasions, and the power of suggestion is so strong in Trump and his followers that Joe Biden, Nancy Pelosi and former Trump attorney Michael Cohen have all expressed serious concern that Trump may try to steal the election or contest the results, and not leave the White House if he loses.

4. Trump appears to believe he has the power to outlaw speech critical of him, and he calls the free press “the enemy of the people.” He tweeted of the New York Times and The Washington Post: “They are both a disgrace to our Country, the Enemy of the People.” Former national security adviser John Bolton, in his new book, claims that Trump said of journalists: “These people should be executed. They are scumbags.”

5. With Fox News promoting Trump’s lies as truth, the president controls one of the most powerful propaganda machines ever created. During the impeachment trial, for example, Fox hosts repeatedly attacked the character and mental faculties of Democratic representatives and sworn witnesses, while focusing almost exclusively on the testimony of pro-Trump Republicans. When it did show footage of Democrats and witnesses, the network frequently used voice-overs to explain or interpret what was being said, rather than broadcasting what was actually being said.

6. Trump believes that he has the power to do what he wants, regardless of Congress or the courts. “I have an Article II, where I have the right to do whatever I want as president,” he has said. He has also claimed to have the “absolute right to do what I want to do with the Justice Department” and, in the event the judiciary branch disagreed, “the absolute right to PARDON myself.” His attorney general, William Barr, and his own lawyers have made clear that this is the administration’s position as they have rejected both congressional and criminal subpoenas for information during the past few years. Their arguments — including an assertion to a federal appellate court last October that the president could shoot someone in the middle of New York’s Fifth Avenue and still be immune from prosecution until he left office — came crashing down with a Supreme Court decision Thursday. “We cannot conclude that absolute immunity is necessary or appropriate under Article II or the Supremacy Clause,” Chief Justice John Roberts wrote.

7. Trump acts as if he owns our government and can fire any official who defends the law. He has dismissed an FBI director and an acting FBI director, as well as five inspectors general and U.S. attorneys, all of whom were investigating or considering either his abuse of power or the alleged crimes of his cronies. This past week, Lt. Col. Alexander Vindman, who served as a national security aide at the White House until earlier this year and was up for a promotion, resigned from the military, citing “bullying, intimidation, and retaliation” after he testified under oath to Congress counter to Trump’s interests.

8. Trump uses federal prosecutorial powers to investigate his opponents and anyone who dares scrutinize him or his allies for the many crimes they may have committed. After the Mueller investigation of Russia’s role in the 2016 election, Trump’s Justice Department began a criminal probe into the origins of the inquiry — to, in Trump’s words, “investigate the investigators.” He tried to get the Justice Department to prosecute former FBI director James Comey and Hillary Clinton.

9. Trump viciously attacks his critics and has publicly implied that the Ukraine whistleblower should be hanged for treason. During a speech to diplomatic staffers in New York last September, Trump said: “I want to know who’s the person who gave the whistleblower the information? Because that’s close to a spy. You know what we used to do in the old days when we were smart? Right? The spies and treason, we used to handle it a little differently than we do now.”

10. Trump has messianic delusions that are supported with religious fervor by millions of his supporters. He has “jokingly” looked up to the sky and said, “I am the chosen one” in relation to negotiations with China. Then-Energy Secretary Rick Perry echoed other evangelicals who’ve said that Trump was sent by God to do great things when he seriously proclaimed that Trump is the “chosen one.” A Guardian report described the evangelical response to Trump’s photo op in front of Lafayette Square’s St. John’s Episcopal Church, which many viewed positively: One evangelical supporter was so moved that she began speaking in tongues when she saw the footage, according to her son.

11. Trump subscribes to a doctrine of genetic superiority and incites racial hatred to scapegoat immigrants and gain power. He has rallied his base with dog-whistle attacks, calling Mexicans rapists and criminals. When he attacked a group of progressive members of Congress from diverse backgrounds, he stated that they should go back to the places they came from. Over the years Trump has frequently praised his “winning” genes, at one point telling an interviewer, “I’m proud to have that German blood — there’s no question about it.”

12. Trump finds common ground with the world’s most ruthless dictators while denigrating America’s democratic allies. The oppressive leaders he has praised include North Korea’s Kim Jong Un (“He gets it. He totally gets it”); the Philippines’s Rodrigo Duterte (“What a great job you are doing”); Saudi Arabia’s Mohammed bin Salman (“You have done a spectacular job”); and, of course, Russia’s Vladimir Putin (“You know what? Putin’s fine. He’s fine”). Meanwhile, he has attacked traditional U.S. alliances and allies, like NATO and Germany’s Angela Merkel (“Stupid”).