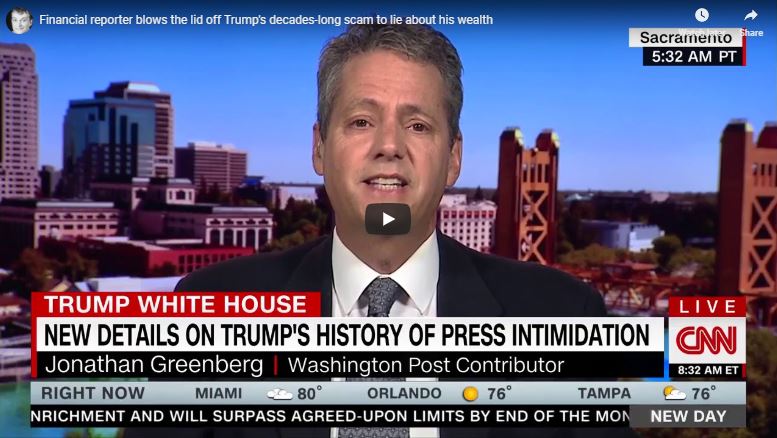 In this segment Jonathan discusses his recent, June 14th, article in the Washington post. In addition to lying his way onto the Forbes 400 list, Trump has consistently engaged in intimidation and blackmail towards investigative reporters, news agencies, and financial analysts. By silencing anyone who would expose the truth he has managed to preserve an image of success while his businesses failed.

This story is currently the number one trending story on  Raw Story This story covers Jonathan’s investigation into the various threats and and acts of intimidation that Trump carried out to hide the fact that the Trump Organization was in debt, facing financial failure. For instance, when Forbes was going to print a story questioning whether Trump was broke, he contacted the magazine and threatened to both sue and release embarrassing information about the magazine’s founder, Malcolm Forbes. While this information was outrageous and beyond suspect, the magazine buckled under the threats and released a much softer piece, estimating Trump’s wealth at half a billion dollars.

Another example took place in March 1990. Marvin Roffman, one of the nation’s leading casino industry stock analysts, told Wall Street Journal reporter Neil Barsky that Trump might not be able to gross the $1.3 million per day he needed to keep the Taj Mahal going. Trump retaliated, intimidating both men’s employers. Roffman was fired (he later won a $750,000 arbitration decision against his former firm and an undisclosed settlement from Trump) while Barsky was reassigned.

Bullying and intimidation are Trumps modus operandi and the only thing he has truly been successful at. From the Washington Post article:

“Trump had waged a relentless, vindictive campaign to build his own myth by suppressing the facts: Between the collapse of his empire in 1991 and the issuance of more than $1 billion in Trump Hotels and Casino Resorts stock and junk bonds by 1996, he’d compromised the truth-telling capacity of Forbes magazine, the Wall Street Journal, TV broadcasters, Arthur Andersen and casino analysts on Wall Street.” 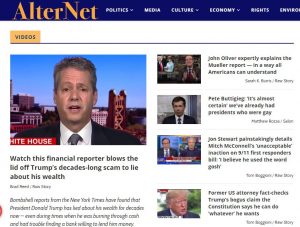