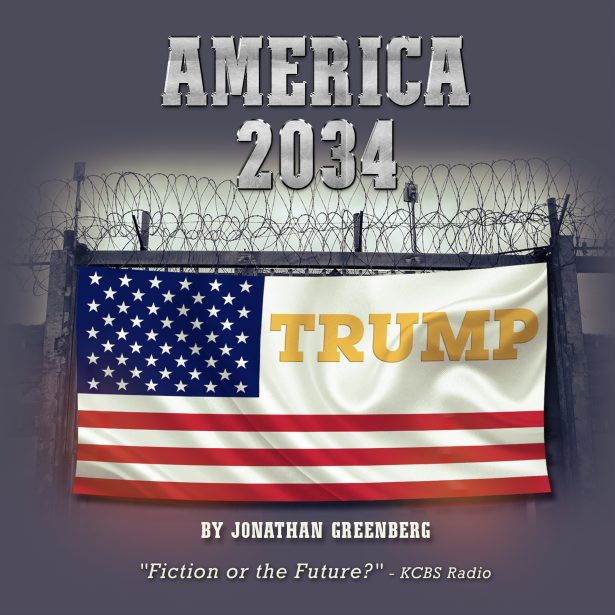 It is 2034, and Donald Jesus Trump is still in power, having presided over the “consolidation of all of the major corporations in the country by the 400 Oligarchs and the Trump Family.” They have destroyed the middle class altogether, keeping “their armies of servants, slaves and employees” cowed by relentless propaganda and constant threat of torture and assassination by a vicious army of “black shirts.”

Prison camps are filled with destitute souls who can never pay the fines necessary to get out and whose body parts have become the only American export that the rest of the world will purchase.

Wait a minute! How can Trump have survived another 16 years in good enough health for all of this?. One of the principal stylistic methods of dystopian writing is hyperbole, or exaggeration of what might really be going on for satiric effect. By 2018, it isn’t much of a leap from all we have learned about Trump’s distasteful prurience to the idea that he and his oligarchs might prolong their lifespans by enslaving lactating mothers to suckle (several times a day) at their breasts.

Meanwhile, the air is so polluted that everyone wears masks, and there has been a serious decline in health from a diet of food poisoned by GMOs, pollution, and pesticides.

Enter (of all people) another Winston Smith, named after the hero of George Orwell’s 1984. Greenberg develops his hero as a fully rounded character,  utterly miserable at his job of making a propaganda film where he has to force his actors to chomp down on ears of chemically contaminated corn with a pretense of appetite.

Just as Orwell’s Winston suffers from “instinctive feeling that the conditions you live in were intolerable and that at some other time that must have been different,” Greenberg’s Winston has sufficient moral consciousness to realize that he is living in a “warped universe” of criminality and tyranny.

The trouble with dystopias is that they tend to make their readers miserable.  1984 is relentlessly dark, with only the briefest hint that there might be a better way to live based on Winston’s vague childhood memory and fleeting fantasies.Yet dystopian writing often enfolds alternative utopian possibilities – think of Orwell’s Animal Farm before the pigs turn themselves into human oligarchs. Or Aldous Huxley’s world of passionate and emotion-driven “Savages” who fail to succumb to the rationalized mechanical sensuality of his Brave New World.

Likewise, in 2034, Greenberg alternates dystopia and utopia.  Accounts of what is going on in his Trumpean “The United Enterprises of America” are interspersed with utopian scenes from  “The United Peoples of America”. He devotes so many chapters to the latter that he doesn’t so much enfold his utopia within his dystopia as to suggest (as his subtitle hints) that his book is mainly about “Utopia Rising.”

As a result, he provides as much utopian hope as dystopian misery. His swiftly moving plot structure reminds me of  J.R. R. Tolkien’s The Lord of the Rings series where “catastrophic” episodes (The Land of Mordor, Mount Doom) alternate with “eucatastrophic” alternatives (the Shire, Lothlorien).

The United Peoples of America have secured a significant swathe of California and the west coast as a “harmonious Wetopia.”

Greenberg introduces them at a meeting in a bomb-proof shelter under Google headquarters in Mountain View, California.

His heroes, Dawn and Maria, accompanied by their two teenage daughters, encounter real-life characters like Washington’s elder stateswoman Patty Murray and Native American rights advocate Winona La Duke in council with Google founder Larry Page, who, we are told, “knew more than almost anyone about the force field that protected their young country from the violent vengeance of the Trump Regime.” A force field created by “devices that both collect and harness psychic chi energy” to form a nearly indestructible shield seven miles above the land they have secured.

Guess who is also at the meeting?  Elon Musk and Mark Zuckerberg. And later, Edward Snowden also makes an unexpected appearance. They are all examples of Greenberg’s quirky inclusion of real people.

Where Donald Jesus Trump attributes his success to “evolution as white men and God’s blessing of the fittest”, Maria and Dawn and their fellow utopians tune themselves in to a universal energy (a “Divine One Spirit”) that activates an altruistic mutation in their individual genetic makeup.  Through reaching an empowering harmony in group singing, each activates an inward genetic mutation toward altruism, a capability for “the facilitation of the common good.”

Their plan is to bring about a “Great Expansion” of this “We-ness” to activate similar genetic changes in Trump’s enslaved populace and overthrow his hegemony.

Available on Amazon as kindle, paperback or audiobook.