This article first appeared in the Sonoma Independent on 12/16/19.

In addition to describing pundits ‘reactions to the coverage, Greenberg brought together fellow journalist’s insights into what this “origin story” can tell us about President Trump’s current behavior. A wide range of commentators discussed the story, from late night talk show hosts like Trever Noah, Seth Myers and Stephen Colbert, to reporters from Salon, the New Yorker, and Forbes.

The Daily Show’s Trevor Noah dedicated a special segment to the story called “Lie Maintenance” and called the con, “Trump’s Origin Lie…The bullshit foundation that he built his entire bullshit career on.

The Sonoma Independent also won First Place for the best headline, for the title to that same story, “What Trump’s John Baron Deception Says About our Truth-less President.”

Since launching in the spring of 2015, the non-profit Sonoma Independent,  with the mission to “serve the public interest by providing our community with essential information and insight,” has won two or more awards in each of its four years in operation, for a total of ten awards.  Sonoma Independent editor Jonathan Greenberg has now won awards  from the San Fransisco Press Club (SFPC) for six consecutive years. 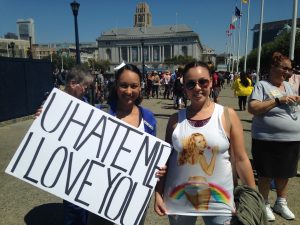 Greenberg’s  article “In Bypassing Warren As VP, Clinton Raises Risk Of Losing To Trump,” published at the beginning of the DNC Convention in July 25, 2016, and which proved sadly prescient,  won first place in 2017 Greater Bay Journalism political columns category. The Sonoma Independent won 3 other awards that year, including second place for the SFPC’s  first “Digital Media Overall Excellence Award.” 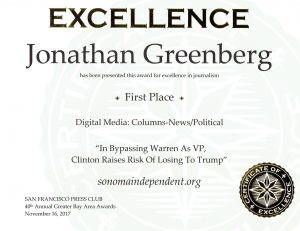 The San Francisco  Press Club awarded the new Sonoma Independent its first two journalism awards during its first year of operation, in 2016, during its 39th Annual Greater Bay Area Journalism Awards ceremony in Foster City. That year, a 2015 column by Greenberg  titled, “Despite Record Budget Surplus, Supervisors Refuse to Restore Library Hours,” won the first place award in the Columns-News/Political digital category. This story was accompanied by a MoveOn civic engagement petition signed by nearly 1,300 citizens. The story and petition were part of Greenberg’s “Restore Library Hours Campaign,” which ultimately succeeded, after a 2018 ballot initiative, in raising sufficient funds to reopen 100 county libraries on Mondays and evenings.

Prior to the founding of the Sonoma Independent in 2015, Greenberg won the SFPC’s e Greater Bay Journalism Award contest for an investigative series of about the closing of Palm Drive Hospital. That series, which appears on the Wacco BB community forum website (where it was viewed more than 27,000 times) won the first place award for “Digital Media: Columns-News/Political.” The largest exposé in the series, “How A Bondholder-Friendly Shutdown Playbook Secretly Sunk Palm Drive Hospital,” won the first place award for a “Feature Story/Serious Nature.”

Sonoma Independent Editor Jonathan Greenberg was a keynote speaker at the SFPC’s award dinner that year, and gave a speech (in the video below), about the movie Spotlight, and the importance of independent investigative journalism in holding the powerful accountable to the people.

The Sonoma Independent’s mission is to serve the public interest by providing our community with essential information and insight. As a non-profit, community-funded public interest media website, we plan to continue to provide high quality articles like these, about challenging issues, and to empower civic engagement that helps us solve them. 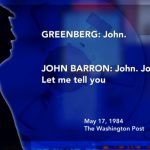