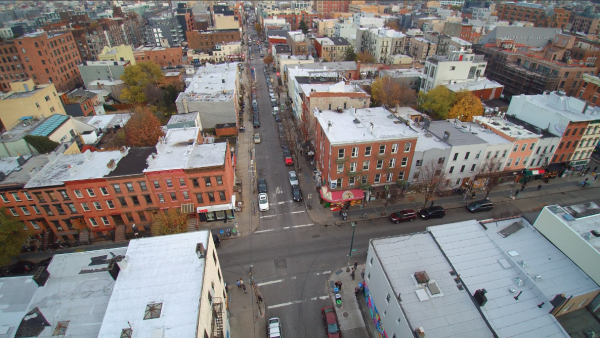 What can be done to preserve small businesses in New York?

Leaning against a wall on East 7th Street in Manhattan, a withered old man can be found on most days star­ ing aimlessly, a pile of clothes beside him. The neighbors say he stands out­ side of a store that had once been his tailor shop. After being forced out when his rent was quintupled, the man would not leave the place that was his life for many decades. The tailor is another sad victim of New York’s prosperity.

One of the most tragic elements of the city’s fiscal resurgence has been the poisonous effect that spiraling rents have had on traditional owner­ operated small businesses. Even hard-nosed developers agree that the decline of mom-and-pop style service stores, shops and restaurants is sad. The friendly  atmosphere  and  charm of such places is essential to any real sense of community.

What can be done to preserve small businesses in New York? A few solu­tions calling for commercial rent control have been proposed. The City Council is weighing a bill that would limit rents landlords could charge. Mayor Koch has come out against such controls and has appointed a commission to study the problem.

Although admirable in its intent, commercial rent control does  not seem politically viable. The real es­tate lobby is sure to fight commercial rent control with all its formidable muscle, and it is unlikely that  any new law will win acceptance anytime soon. Meanwhile, with rents quadru­pling, community shopkeepers a re becoming an extinct species .

But there is a solution that could satisfy community activists and land­ lords: commercial rent subsidies .

The principle behind a commercial rent subsidy law is that those who benefit from such legislation – the citizens of the city- are the ones who should pay for it. The law need not create new taxes. Rather, it would cost taxpayers indirectly, through tax abatements to landlords.

It might work this way: The city creates an agency to administer sub­sidies for businesses that would other­ wise be forced to close when their leases expire. The agency allocates subsidies to various community boards throughout the city in an amount proportional to the number of stores in danger of closing because of increased rents. In other words, areas undergoing greater turnover, such as the Upper West Side, would receive larger subsidies than areas with less turnover.

The community boards then hold hearings to decide which businesses the community feels should be pre­served, basing their decisions on types of services provided by  the stores, years in operation and general neighborhood  support.   The board ‘s  recommendations would be passed on to the city ‘s subsidy agency , which would make the final decision.

The subsidy would make up the difference between what the tenant can afford to pay and the true market value of his space, which can be determined by rentals of similar spaces in the neighborhood. The ten­ant would furnish the board with in­come statements. These would be compared to the landlord’s  request for a rent increase, which could be verified by an independent consult­ant’s assessment of market rates.

A community board may decide, for instance, that a hypothetical busi­ness, Gem Cleaners, which has been run by the same owner for 25 years and is an integral part of the com­munity, is worth preserving. Gem Cleaners has been paying $500 a month rent for 10 years. The agency determines from the store’s profit statement that it is able to pay $1,000 a month and still maintain a reason­able margin of profit. The landlord asks $4,000 a month, and the agency is advised by the consultant  that $3,000 is the true market rent  for the prop­erty. A commercial rent subsidy of $2,000 a month is then granted  to the landlord , who deducts this sum from real estate taxes to be paid to the city for the length of the lease contract.

A number of executives in the real estate industry have already voiced support for this approach.  There would undoubtedly be others who would object to the subsidy, just as there would be community activists who would argue it doesn’t protect shop owners enough.

A subsidy is a compromise that might leave both sides less than fully satisfied. But it would break the im­passe that is hopelessly choking off small businesses and the unique char­acter of New York.  lt would neither deprive landlords of their right to a fair rerun on investments nor force shopkeepers, like the tailor on 7th Street, into  the  cold.  It is a compro­mise New Yorkers can live with.