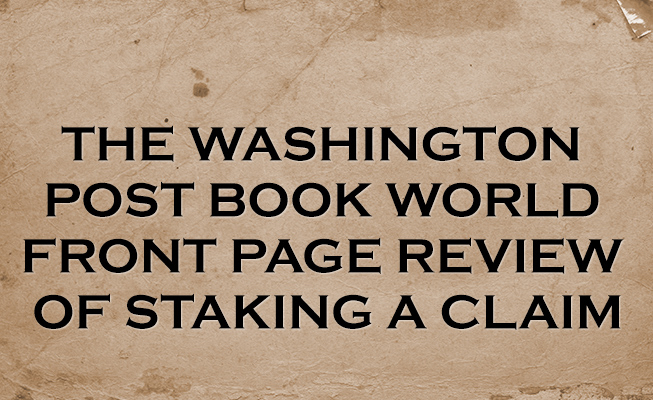 It is the rare biography that  challenges a reader’s senses in the same way science fiction does: creating a world of its own, complete with geography, characters and a value system that consistently undermines a reader’s assumptions and prejudices. Staking a Claim: Jake Simmons Jr. and the Making of an African-American Oil Dynasty is such a book.

Ostensibly, Staking a Claim is the biography of Jake Simmons Jr., who beginning in the 1920’s built a business empire brokering oil leases in Oklahoma, Texas, and Africa that continues to thrive today.

At it’s best, Staking a Claim is a fascinating history of the early bonds between African slaves and Native Americans, particularly the Creek Indians, of whom Simmons’s great grandfather, Cow Tom, was a chief. It is also the story of the westward pattern of slave and Native American migration at the end of the 19th century. The book is a unique examination of the communities built in Oklahoma by these despised and disenfranchised immigrants and how, as full members of the Week nation, ex-slaves were able to get ahold of a piece of America otherwise denied them.

Finally, Staking a Claim is the history of the Simmons family, whose values, among them love of the land, hard work integrity and the power of individual success, were passed down from generation to generation by both African and Indian forebears.

At the end of the 19th century, in response to the land hunger of white settlers, the U.S. government simply dissolved the Creeks’ tribal government, stole their land and allotted each tribe member 160 acres. Ironically, this devastating blow to the Native American nation had positive consequences for the black Creeks.

“Some 37 percent of the Creek tribe con­sisted of blacks, and their allotments eventually amounted to more than one million acres,” writes author Jonathan Green berg. “A relatively tiny amount of land did reach black homestead­ers, but all in all the four million slaves freed throughout the U.S. probably received less land than the total received by 23,400 blacks in Indian Territory.

“The difference this made to Indian blacks like the Simmonses is no small matter.”

Indeed it wasn’t. A self-educated, shrewd man, Jake Simmons Sr. understood early on that land equaled money, power and security. Starting out \\ith his 160 acres, Simmons bought land from relatives and acquaintances bent on selling, and swapped parcels with neigh­bors. By 1915 he owned nearly 1.800 acres, and was father to 14 children. He ran a thriving cat­tle, com and cotton farm, worked as a cattle bro­ker, and had Booker T. Washington as a dinner guest. In a 1915 profile, Simmons said his farm and cattle brokering had earned him the then enormous sum of $12,000 the preceding year.

Staking a Claim focuses on the life of one of Simmons’s sons, Jake Jr. Like his father, land was important to him, but for different reasons. Jake Jr. came of age during a time when oil was being discovered in Oklahoma and on Creek lands. “To him, land represented an asset, not a lifestyle, Greenberg writes. By the time he was 10 years old young Jake had made up his mind never to be a farmer … ” ‘ I want to be an oil- man,’ he said.”

Jake Jr. attended Tuskegee Institute, working summers at the Ford plant in Detroit.  He was, vice president of his senior class and spoke at his graduation in 1919. He married, left his father’s farm and moved to the city, Muskogee. where he worked as a successful real estate man and oil broker in Oklahoma, Texas and, later, Africa.

As much as Staking a Claim is a portrait of Jake Simmons Jr., it is also a picture of the times he lived in. Greenberg digresses liberally from the narrative of Simmons’ s life to describe the historical and political context of his achievements and setbacks.

In the spring of 1921, while Simmons strug­gled to recover from business losses, a major race riot broke out in Tulsa. resulting in numer­ous deaths. “By 1923, in a state of scarcely two million, 103.000 Oklahomans were Klan members,” writes Greenberg. “Nonetheless, Sim­mons managed to find white oil men willing to deal with him.”

His fortune was made by brokering leases for exploration of potentially oil-rich land between the owners – often African Americans, Creeks or Africans wary of white businessmen-and major companies with the money and equipment to drill wells.

In addition to being a successful businessman, Simmons was also an outspoken race man. He joined the NAACP soon after graduating from college, and was an active member until his death in 1981. Appointed to a state commission to investigate the public institutions for blacks in Taft, Okla.- a detention center for juveniles, a home for the mentally ill and an orphanage­ he refused to whitewash the governor’s appoin­tee, and resigned. In 1938. he and his wife. Eva, filed suit in Muskogee, seeking to declare the sale of school bonds unconstitutional because none of the funds to be raised were allocated for Negro education. In his own personal integra­tion strategy. he regularly sent his highly qual­ified secretary to apply for jobs in segregated institutions in the 1960s, then raised a public stink if she wasn’t hired. He ran for political office three times over the years. Though he never won, Simmons became a political leader to be reckoned with.

In the last decades of his life, Simmons was able to broker leases in Africa with major oil companies. including Sunray, Phillips Petroleum and Signal. In addition to money paid him up front. he kept a percentage of future oil reve­nues, and some leases continue to produce in­ come.

Unfortunately, the last third of Staking a Claim raises more questions than it answers. What are the details of Simmons entry into oil exploration in Africa? How much money did he make? Why has only one of his three sons joined the company? What is the worth of the Simmons Royalty Company today? Despite these quibbles. Staking a Claim opens up a fascinating land· scape. Finishing the book, a reader  feels not unlike Jake Simmons must have after brokering his first successful oil deal , and wants more , more.

This article originally appeared in The Washington Post on Sunday Feb 4 1990. A PDF of the original can be found here.