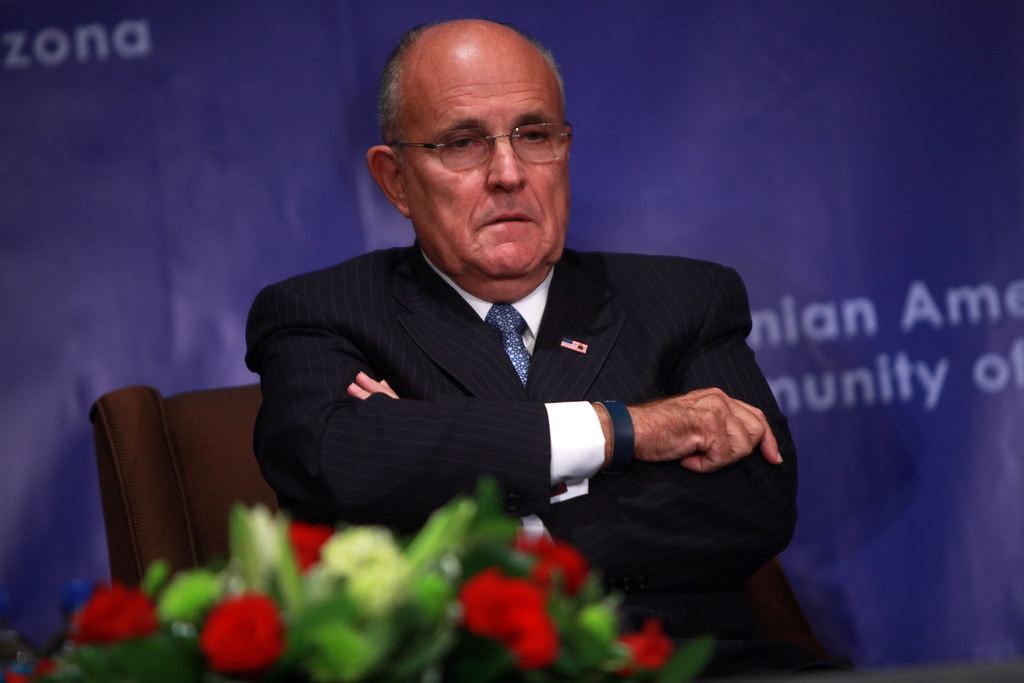 This column first appeared on Alternet.org on August 30, 2004

When former Mayor Rudy Giuliani, Time magazine’s “Person of the Year” for 2001, appears next Monday as a prime time speaker at the Republican National Convention, it will be largely to confer fellow hero status upon President Bush. The Republican Party hopes that Giuliani’s extension of his post 9-11 hero’s glow to the President will banish from our memory both men’s actual records before and after that tragic day. Here are a few critical reminders of Giuliani’s real record, surprisingly similar to the President’s:

1) Disdain for the Constitution

Mayor Giuliani routinely disregarded the First Amendment as he rejected requests for information from news organizations and civic groups and opposed public access to city hall steps and parks for demonstrations. “Freedom is about authority,” Giuliani said, responding to critics in 1998. “Freedom is about the willingness of every single human being to cede to lawful authority a great deal of discretion about what you do and how you do it.” The following year, after the mayor cut funding to the Brooklyn Museum because it displayed a work of art that offended him, federal judge Nina Gershon ruled that Giuliani violated the First Amendment and ordered funding restored. “There is no federal constitutional issue more grave,” she wrote, “than the effort by government officials to censor works of expression and to threaten the vitality of a major cultural institution as punishment for failing to abide by governmental demands for orthodoxy.”  Giuliani called Judge Gershon’s decision “the usual knee-jerk reaction” and said he would order the city’s lawyers to appeal.

2) Subverting Democracy to Suit His Needs

Just two weeks after the Twin Towers fell, Giuliani attempted to become the first official in American history to use an emergency to extend his elected term. Most Americans forget that Giuliani spent a week bullying the mayoral candidates to allow him three extra months in office after his term ended in December 2001. The power grab fell through when the leader of the state assembly refused to change electoral law to suit Giuliani’s demands. Despite Giuliani’s dire warning that no one but him would be prepared for “the monumental tasks that lie ahead,” the next mayor’s first three months passed without incident.

In a legally questionable transaction on December 24, 2001, just days before the end of the mayor’s second term, Giuliani secretly transferred all 2,100 boxes of mayoral files and videos from his eight years in office. The records, which by law were to become the property of the Municipal archives, were moved to a gated private storage facility, and their control was transferred to the Rudolph W. Giuliani Center for Urban Affairs, a newly-established private nonprofit group controlled by Giuliani. Angry archivists and historians denounced the unprecedented hijacking of public property to private hands. Tom Connors, of the Society of American Archivists, said the transfer seemed part of a movement to “create barriers to the American citizen’s right to know what their governments are doing.” Saul Cohen, the head of the new nonprofit group, a longtime friend of Giuliani’s defended the action, arguing, “The public should trust him. With Rudy, with great respect to previous mayors, we are talking about a national figure.”

4) Profiting From His Hero Status

In February, 2002, Giuliani insisted upon transferring guardianship of the $100-million left in the city-run Twin Towers Fund to a private charity he controlled. The families of the police and fire rescuers who died in the attack balked at Giuliani’s plan to take up to a year to dole out the money, with his new organization billing $2.2 million in anticipated administrative expenses (including six-figure salaries for friends he appointed as officers). The families argued that the fire union had far more quickly distributed $111 million with an estimated administrative cost of just $30,000. Under embarrassing pressure from the victims’ families, unions and state Attorney General Elliot Spitzer, Giuliani backed down. He promised to distribute the money within 60 days and fund his overhead from new donations. The families of the deceased rescuers, the real heroes of the September 11 attacks, received a one-time benefit of about $230,000 each from the Giuliani-privatized fund in 2002. That year, the former mayor earned some $8 million in speaking fees alone, more than $650,000 per month.

5) Refusal to Acknowledge Mistakes or Apologize

In the section concerning the city’s response to the World Trade Center, the 9-11 Commissions wrote, “Effective decision-making in New York was hampered by problems in command and control and in internal communications.” Firefighters inside the towers never heard what was being transmitted on police rescuers’ radios, or learned news of collapsing floors from emergency calls made to 911 operators. At a New York hearing last May, 9-11 Commissioner John Lehman noted that at the time of the attacks, the city’s command, control and communication systems were “not worthy of the Boy Scouts, let alone this great city.” Although he had been mayor for eight years following the first terrorist bombing of the World Trade Center, Giuliani never repaired the communications problems that plagued the city. A McKinsey & Co. report found that on September 11, New York’s fire chiefs were working with defective radios and often could not communicate their orders to evacuate. The same radio system, they observed, had failed eight years earlier.  Far from taking responsibility or apologizing, when Giuliani appeared before the 9-11 Commission, he called the city’s emergency response “unbelievably capable” and “terrifically effective.” Giuliani’s testimony was repeatedly interrupted by the angry protests of relatives of victims.  Monica Gabrielle, whose husband was killed in the attacks, complained afterward that the panel and Giuliani spent the morning “cloaking everything in heroism. We leave frustrated,” she concluded. “They made a huge faux pas in letting Rudy Giuliani polish his crown.”

The American public should not make the same mistake. Hero coronations are for autocracies, not democracies like ours.