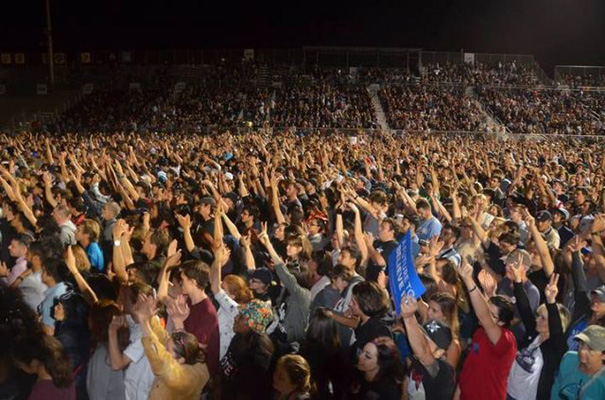 Sanders Political Evolutionaries Will Win In 2020. But It’s Now Time To Support Clinton And Defeat Trump

Led by more than 70% of the youngest voters in this country, we, the reformist Bernie supporters who INSIST on honest government for the public interest, are the future of the Democratic Party.

As Bernie Sanders exits the race for President, I join in the sadness expressed in this video; in the tears and disappointment seen in the faces of Bernie delegates in Philadelphia, as they work to represent 13 million of us at the Democratic Convention.

I join with the many who will continue to work to transform our government to one that represents We, the People, not they, the Corporations, who have corrupted the entire Republican Congress, and all too many Democrats.

I also join Bernie Sanders and Elizabeth Warren in uniting with the Clinton wing of the Democratic Party to do what we must to ensure that Hillary Clinton, and not Donald Trump, becomes the next President of the United States.

I write this as an independent  blogger who has been a consistent supporter of Bernie Sanders, the transformative issues that he stands for, and the importance of shedding light on the false narratives that the American Corptocracy uses to misinform the American electorate.  Just last week, I wrote this column, criticizing Clinton for increasing the risk that Trump will win by choosing Tom Kaine over Elizabeth Warren as his VP choice.

I share the deep frustration of many Americans who feel the enormous missed opportunity of a Sanders/Trump contest.  Polls have consistently shown that Bernie would trounce Trump almost everywhere, likely with huge coattails in the Senate and House for Democrats. An important new Suffolk University poll of likely Pennsylvania votes conducted during the convention between July 25 to July 27 found that Sanders was the most popular politician in the country for Pennsylvanians. 60% of voters viewed Sanders favorably, vs. 33% for Trump, 44% for Hillary Clinton, and 53% for Obama.  I speak for many when I say that I would sleep more easily knowing that Bernie Sanders, and not Hillary Clinton, was facing Donald Trump in this November’s election.

Clearly, Bernie Sanders and the critical systematic changes that he represents are here to stay.  I will be forever grateful to Bernie Sanders for setting the transformation of our political system in motion by speaking truth to power on a national scale never witnessed in modern American history.

Bernie’s Second American Revolution is the grassroots, people-powered peaceful evolution of our corporate corrupted system to one of responsive government.

It threatens every element of a political system that Bernie has courageously blown the whistle on as rigged by the corporations who bankroll it.

Yet this rigged system, with the Democratic Party establishment lining up like a blue wall of power to block Bernie, still lost 47% of the vote to Sanders.

That was with a Democratic National Committee that was so unethically biased toward Clinton that even Senate leader Harry Reid recently stated that Debbie Wasserman Schultz ought to have resigned sooner because, “I thought Bernie deserved somebody that was not critical to him. I knew ― everybody knew ― that this was not a fair deal.”

Despite that, and despite an even more Clinton-biased corporate media, whose inaccurate polls and deceptive pundits proclaimed Hillary’s victory before a single vote was cast, Bernie won the primary in 22 states, some of them by landslides margins.

Bernie received an average of 70% of the youth vote, winning that demographic in virtually every state, sometimes taking six out of seven votes.  Hillary won by a similar 70% to 30% margin among voters over the age of 70.

That’s because by the 2020 Democratic Presidential primary, there will be 3% fewer of the oldest voters alive to  back Hillary Clinton’s re-election bid, and 3% more of the youngest voters entering the system who will back a Sanders-style grassroots progressive. All things being equal, this trend will result in a tie, 50% to 50%. When the benefit of four years of people-powered organizing gets factored in, Clinton will probably lose the 2020 primary to Elizabeth Warren, Bernie Sanders, or someone who stands for their values―and ours.

By 2024, about 14% of the oldest voters in the country will be replaced by 14% of the youngest voters. If young Democratic citizens vote like they did this year (70% for a Sanders-like challenger), an establishment Clinton-style corporate centrist would be viewed as a political dinosaur by these new voters and receive 6% less of the total vote than a reformist challenger.  This would mean that a Sanders-style candidate would win the Democratic primary in 2024 by the same 53 to 47% margin that Hillary beat Bernie by.

Demographics have made undeniably clear the fact that Bernie Sanders voters are the future of the Democratic Party.

Yet the work of the peaceful evolution that is Bernie’s “Second American Revolution” has just begun.

There will be victories, like the Party’s (not nearly significant enough) shift on a few key issues, and the legalization of marijuana in California this year, and a diminishment of the racist, unjust incarceration state.

And there will be compromises, like supporting Hillary Clinton to make sure that the most dangerous authoritarian to ever enter our national stage does not get elected this November.