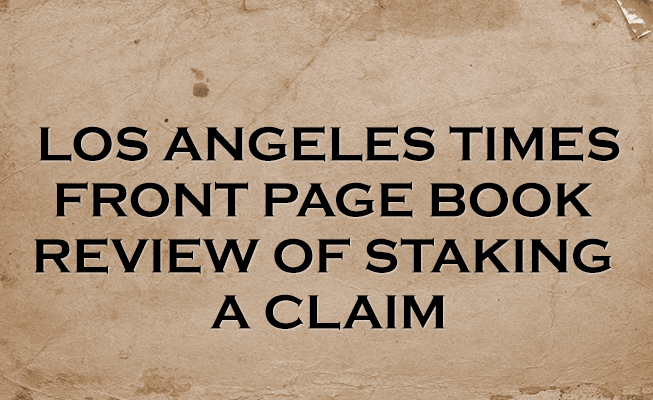 Throughout “Staking a Claim,” financial reporter Jonathan Greenberg presents us with the inspirational saga of a black Oklahoma family whose history inter­sects significantly not only with important civil-rights legislation but also with the Native American past and the evolution of the oil industry.

It is an important biography because one sad consequence of the media’s total identification of African-American history with blacks who are poor and powerless, under­-educated and “marginalized” is our frequent inability to see or fully appreciate proud, self-sufficient nationalists like Jake Simmons Jr., an oil tycoon and indefatigable community servant who told his children, “You are equal to anyone. but if you think you’re not, you’re not.”

Ironically though, Simmons himself was heir to unusual privileges won for his clan by his father,Jake Sr., and great – grandfather, Cow Tom. According to Greenberg, who provides wonderfully detailed research on the 19th-Century relationship between blacks and Indians, Cow Tom was owned by an affluent leader of the Creek Tribe from whom he bought his freedom. He went on to become one of the tribe’s principal interpreters. a black chief, and prospered when African-Americans on Indian land in Oklahoma were included in the tribe’s communal land trust.

By 1870, Cow Tom was “singled out and described as a superlative example of a prosperous Creek farmer.” His granddaughter Rose married an industrious, generous and adulterous rancher, Jake Simmons Sr., and together with their 14 children they built their own school and church on Indian territory. As things turned out, they were as lucky as Cow Tom because in the 1890s. U.S. official s decided to break up Creek land into individual allotments.  Jake Sr. and Rose were entitled to a birthright of 160 acres of tribal land, which by 1915 the family had increased eight-fold.

However, as Greenberg shows. family privilege isn’t enough to explain Jake Jr.·, astonishing career in politics and oil brokering, a career that took him from Tuskegee Institute – where he absorbed the discipline, religiousness and philosophy of self-reliance taught by Booker T. Washington – to exploitation of the Oklahoma oil boom before the Depress ion. He was a hustler, a “lease hound” trusted both by blacks on oil-rich land and the white companies that fleeced them before he came.

A perfectionist in the truest sense of the world, he asked his sons, Donald (who became director of the Harlem Commonwealth Council) and J.J. (who moved on to become the second highest ranking black official in Washington), “How the hell can a black man stay in bed in the morning when white men rule the world'” And Simmons, it seems, never slept as long as a dollar could be made for the Simmons Royalty Co. or a discriminatory law was still on the books.

Of course, the two went together: economic freedom and political activism. An acquaintance of Simmons interviewed by Greenberg observes, “What stopped Jake’ s political energies from ruining him was that he struck it rich. He was independent of the power structure and never had to worry about losing his job.”

Thus. financially free of the white world, as free of it as Cow Tom had been on his Creek land, Simmons opposed in 1938 a bond issue that would put money into a white school in the city of Muskogee but nothing into the black one. Despite shotgun blasts that blew out his windows, and callers shouting, “We’re gonna get you, nigger-you’re a dead man!” he served as head of Oklahoma’s NAACP, was president of the Negro Chamber of Commerce, “single-handedly desegregated the Muskogee branch of the Knights of Columbus,” ran for political office and, when that failed, settled on the role of being a power broker for civil rights and “the single most influential black leader in Oklahoma.”

Indeed, Jake Simmons thrived on adversity and saw every racial obstacle as a challenge. He excelled at being the first black to break the color barrier In dozens of places­ the board rooms of multinational corporations, the National Petroleum Council and even an all-white nursing home before his death at age 80 in 1981. “I subscribe myself to the philosophy that mankind was made for struggle,” he once explained in an essay. “Such was the plight of our race, and who in the world will challenge our eighty years of progress in America, which is unprecedented in the entire category of human endeavor?   Mankind  grows strong and noble under strain.”

Whether Simmons’ greatest triumph was in bringing major oil companies like Phillips Petroleum to Nigeria or Agri-Petro to Ghana (which gave him the country’s highest medal) or in serving “like a Sicilian godfather” to Oklahoma’s disenfranchised blacks and women Is difficult to say. Both roles were sides of the same dream, the global liberation of non-whites from poverty and dependency.

Internationally, Simmons   was a “swashbuckling Independent black oil man”- “a complete 100 percent capitalist who made no apologies about it”- whose wheeling and dealing, counseling and networking, bluffing when he lacked white support and taking charge when he had it, helped newly formed African nations develop their mineral resources-

At home, he was “a black Joe Kennedy,” courted by the likes of J.F.K. and Lyndon Johnson, and by hundreds of African-Americans for whom he found jobs. “If they needed money or had a problem, they would see Jake,” said one banker. “That was all there was to it He was Kingfish of the blacks.”

Few men seem destined to shape history quite as thoroughly as did Jake Simmons Jr., though Green­berg makes It clear in a beautiful anecdote concerning the first black International oil broker’s wanting everyone to be so empowered.

”To groups of young people,” he writes, Simmons told the story “about an old man commencing work on a new bridge. A youngster approaches and asks, ‘Why are you building a bridge? You’re an old man and this is the close of the day.’

This Review first appears in the Los Angeles Times Book Review on Sunday March 18 1990. A PDF of the original review can be seen here.